Want some LSAT logical reasoning help? How about LSAT academic coaching from a 99th percentile tutor? You’ll get a customized study plan, 24/7 texting and email support, weekly check-ins with homework in between,  and continual encouragement right up until test day. Only $299/month (way cheaper and more effective than a class!)

The best way to look at LR instead is to recognize it as an argument, with a conclusion, reasoning, and premise. The conclusion is what’s supported, and is an opinion or prediction. Reasoning supports the conclusion (i.e. you can put because or since in front of it). The premises are what you start with.

Every type of LR question on the LSAT is based off of this. Parts might be missing, or you might be asked to fill in some gaps, but it all comes down to the structure of an argument.

I’ve taken some questions from LSAT PrepTest 71, which the LSAC offers for free online as part of their digital practice. I want to show you how to answer each of these types of questions by viewing them through the lens of an argument. I also really hope the LSAC doesn’t copyright strike me for these, but we’ll cross that bridge when we come to it.

Let’s approach this as an argument, like I was saying before.

Identifying the conclusion, first: “the agency is unlikely to achieve its goal” [to strengthen the banking system].

Reasoning: well, we know some piece of reasoning is going to go in the blank after “since”. But the other piece is “the banking system will not be strengthened if the former owners of these banks buy them back”.

Premises are everything else.

So E strengthens that link. 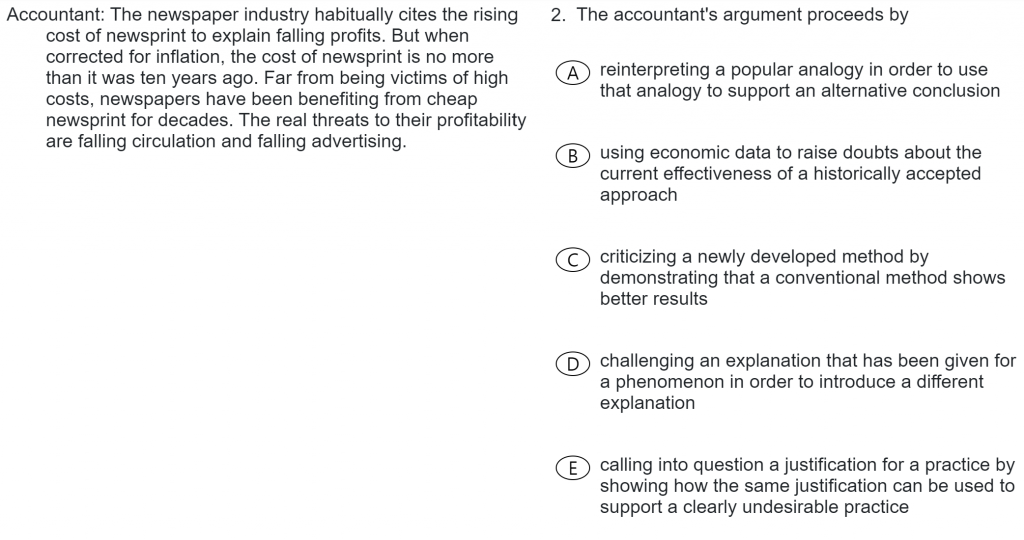 This is literally asking us to identify how the argument works.

So, let’s find the conclusion: “The real threats to their profitability are falling circulation and falling advertising” (that’s what the rest of the argument is supporting, although not particularly well).

Reasoning: Because “the cost of newsprint is no more than it was ten years ago” AND “newspapers have been benefiting from cheap newsprint for decades”.

The premise: “The newspaper industry habitually cites the rising cost of newsprint to explain falling profits.”

So, this argument identifies an argument, disagrees with that argument, and then introduces a conclusion that’s not very well supported. D fits in well (introducing a different explanation is another way of saying it’s not a well supported conclusion). 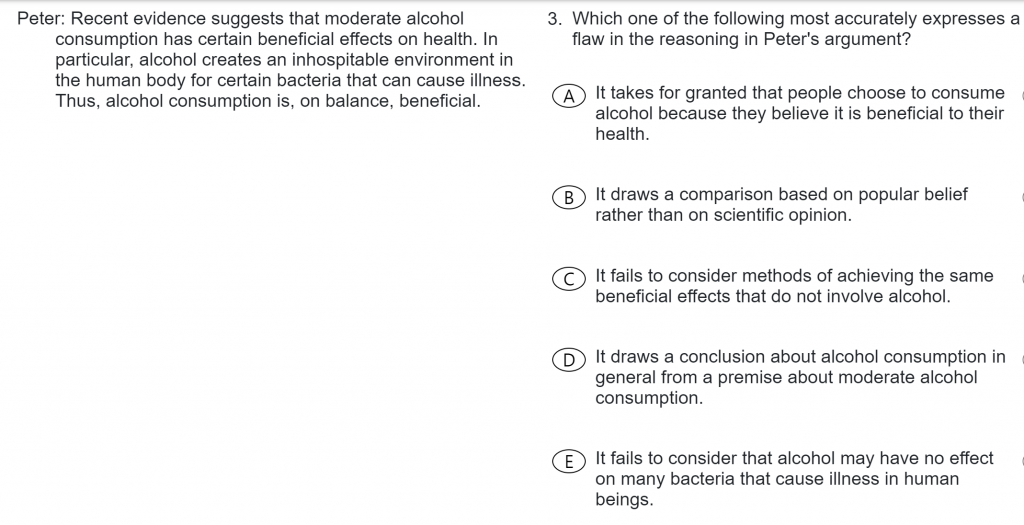 Reasoning: Because “alcohol creates an inhospitable environment in the body for certain bacteria” AND “moderate alcohol consumption has certain beneficial effects on health”.

Well,  two problems. First, the reasoning says “on balance”, but there’s no balance in the reasoning. Only a benefit. 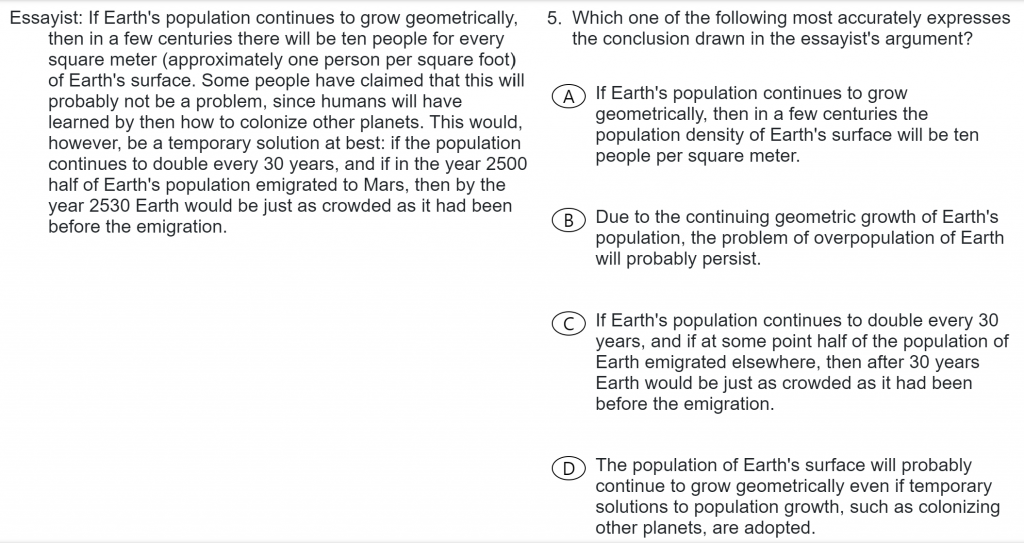 So, whatever conclusion we find, let’s make sure it’s supported by everything else and doesn’t support anything else.

Conclusion: “Colonizing other planets would be a temporary solution to overpopulation at best”.

Let’s make sure that’s supported by everything else.

Everything else supports our conclusion.

So, this is slightly different. Our conclusion is missing (i.e. the statement that’s supported), which is tough, because that’s normally how we organize our process. So let’s keep close track of the reasoning, and see where it leads us to.

The study was about hypnosis and recall (memory). In this study, a number of subjects listened to a long, unfamiliar piece of music. Then they were hypnotized, and asked about either music or film. Both of them had detailed recollections (even though both groups only listened to music).

So, this is strange. Even if they didn’t watch a film, they were really confident in their recall. So, there’s something strange going on with hypnosis (it can make people falsely recall).

D fits best with that. C is way too strong, and doesn’t fit in the argument (the music people were correct in their recall).

We’ll need to analyze both arguments.

Yolanda’s reasoning: Because optometry research is like happiness research in that both rely on reports AND “optometry is a scientific discipline”.

So, they’ve got a weird disagreement. Vincent says science can’t study happiness, and Yolanda says that happiness research is scientific. In their reasoning, they disagree on what scientific disciplines are supposed to rely on. 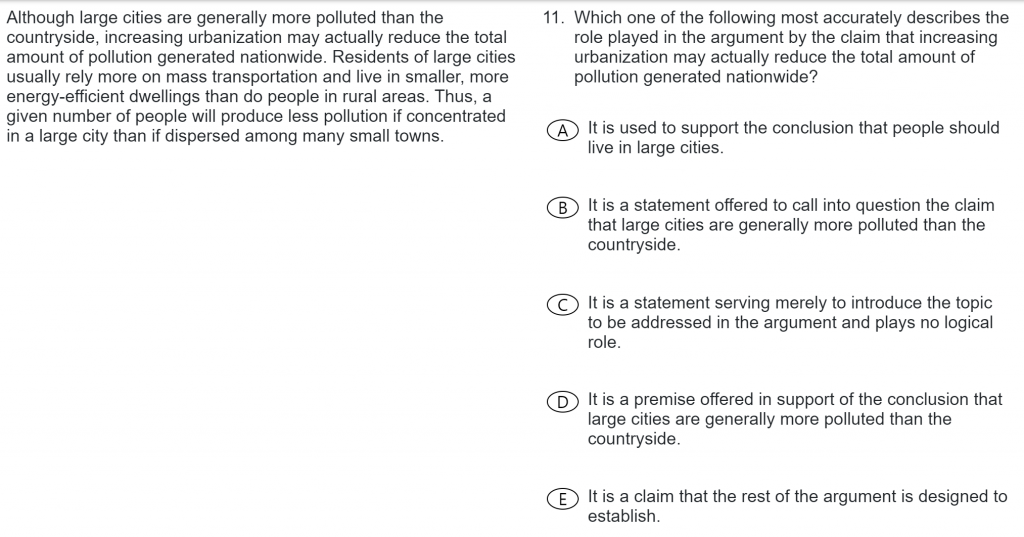 Reasoning: Because “residents of large cities…” AND THEREFORE “given number of people…”.

So the answer is E. 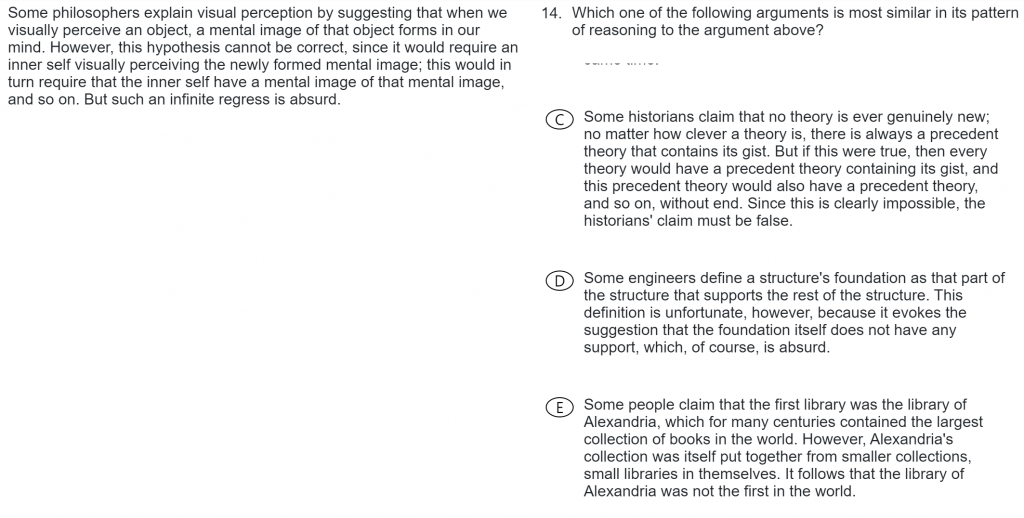 These questions are frustrating because they have a lot of text, but can be approached the same way.

Original conclusion: “The hypothesis [that when we visually perceive an object, a mental image of that object forms in our mind” cannot be correct.”

So, it argues against the philosophers by explaining how their beliefs lead to an infinite regress, and then say the regress is absurd.

The only similar argument that also has an infinite regress is C.

Conclusion: Most of the nations stating that their oil reserves were unchanged [between end of 1996 and end of 1997] are probably incorrect.

Reasoning: Because oil reserves change as oil fields are drained or as they’re discovered.

Logical Reasoning must be true question

Missing conclusion, so let’s trace the reasoning. Let’s separate out the terms, so it’s easier to trace them.

None of the motors manufactured by EM are quiet enough, [so can’t assume they can be used in institutions].

Reasoning: Because you shouldn’t misrepresent another person’s belief except to act in their interest.

[Interpret: how can we violate this? By misrepresenting their belief for anything else].

A works here. Think of it as a conclusion: therefore, Ann was wrong when she… because she misrepresented a belief only to humiliate Bruce.

This one is just an argument in disguise that needs strengthening. Let me show you.

Conclusion: Therefore, the Australian sheep farming family did not enjoy an increase in prosperity.

Reasoning: Because, even though they generated more income from selling their wool from international wool prices, ___ [missing reasoning].

What would fit in here?

A is tempting, but it talks about the price of wool sold domestically (not internationally).

C is the correct answer.  They made more money from wool, but lost it from other sheep products, so net-net came out zero.

Conclusion: animal feed should not include genetically modified plants.

In order for this reasoning to work, we have to assume this is a good comparison: genetically modified potatoes vs. normal diet. To weaken it, we weaken the comparison.

A weakens it. If potatoes aren’t part of a normal diet, it’s a bad comparison.

This one is backwards from our earlier one. We get a conclusion, and now we’re trying to get reasoning.

Conclusion: Therefore, high school career counselors should tell students who are interested in journalism what life is like for a typical reporter (at a local paper).

Reasoning: Because most journalists cover local news, unlike what high school students think, AND __

D. If career counselors should try to correct their misconceptions, then D makes sense.

Here we have reasoning, but are looking for a conclusion. Again, let’s be careful with our reasoning so we understand it.

Because three year olds couldn’t remember their phone number, although they knew the names of the digits AND once they were taught a song with the digits, they remembered it.

It fits together the idea of them knowing the names of the digits with the use of the song, without trying to go too far and make absolute statements like A or C (there might have been other, better ways that weren’t tried).