Having trouble on the LSAT? Need a study buddy? How about LSAT academic coaching from a 99th percentile tutor?  As long as you can provide the hard work, we can provide you with a customized study plan, expert resources, 24/7 texting and email support, weekly check-ins with homework in between,  and continual encouragement right up until test day. Only $299/month (way cheaper and more effective than a class!)

LSAT logic games is probably the hardest section to do the first time a student tries it. It’s a really weird section.

However, it’s also the easiest to improve on. Logic games is very learnable. In fact, it’s so learnable that more recent LSATs have started to toss in weirder and harder logic games, because too many people were acing it.

So, sorry that you’re taking the exam now instead of 5 or 6 years ago. Your life would have been easier on LG. Good news, though, is that the same tactics still apply. We just now need to be more flexible with our strategy, rather than rote.

That’s the way I teach logic games. Part of that approach means that I rely way less on diagrams than other tutors or test prep companies. I really try to just focus on using diagrams only when the logic gets too complex.

I mainly just follow the rules very closely. I continually refer back to the rules, tracing the logic as far as it can go.

Let me show you what I mean. I’ve taken logic games questions from PrepTest 71, which is available for free on LSAC.org. Hope I don’t get copyrighted!

For this, we can just go through our answer choices and start crossing things off. I’ll make a first pass on things that I’m confident on, and head back and do the entire logic on any answer choices that I have questions about.

Can Fiesta be released second? Well, the only rule is that has to be earlier than J and L. That seems fine.

Can K be 5th? Definitely not. It has to have two spots after it (J and H). So E is the correct answer.

Logic games linear could be true except

This one is similar to the last one, but we’re given a condition first. G is earlier than H.

Looking ahead, it seems obvious L can’t be 5th (not enough room for GH afterwards).

Logic games linear could be true

Again, similar to the last one. I can just go through and find the ones that can’t be true. Whatever’s left could be true.

L can’t be third, because there’s nothing to put second.

Same deal with B.

C is definitely off (H is after K).

E is impossible (K is before J).

Logic games linear must be true

So, this we can just go through the answer choices again, heading right back to the rules.

These ones annoy everyone. The important thing is that it needs to have the same effect: no more, no less.

A works perfectly here. Let’s go through the other ones to see why they don’t.

B is just inaccurate (that’s not what the rule says).

C is true, but then is too loose (if F is second, can L be first? For the actual rule, no. For C, yes. We need to tighten that).

E has the same problem as C (if K is first, can F just go anywhere? According to the actual rule, no. According to E, yes.)

Logic games grouping could be the assignment

This one is easy enough. Once again, we’re just going to work our way through the rules.

A fits in with all the rules. Done!

To give an example of how this would work if it didn’t, in B, rule 2 fails (F is separated from L).

Logic games grouping could be true

For this one, let’s see what happens. If Hong is evaluated by Rao, then Rao can’t do Inman. Rao also can’t do Kent.

Let’s diagram what happens for the rest for a setup, then go through the answer choices. It’s tough to keep these grouping ones in your head. Notice how Kent has to go with Tipton: if he goes with Smith, then no chance for Smith to have more than Tipton (rule 5). 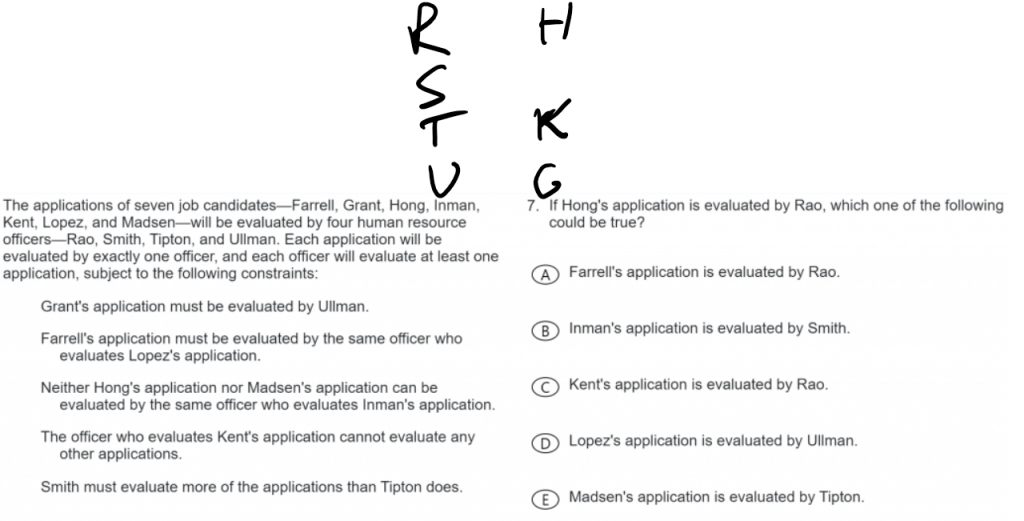 For A, if R evaluates F, then R has F, L, and H. That leaves I and M unaccounted for, and they both can’t go to S (rule 3). That means rule 5 would be violated, because S would have only 1.

For B, it’s ok. We give I to S, then can also give him F and L. M can go to R. We’re set. B is correct. Let’s check the others just for practice (you wouldn’t do this on the test).

For C, obviously impossible because of rule 4.

For D, we give L and F to U, which is going to end up depriving S (same situation as A, essentially).

E is obviously impossible from our diagram.

Now we need to still distribute Hong, Inman, and Madsen. 2 of those need to go to Smith so he can have more than Tipton, which have to be Hong and Madsen because of rule 3 (5 fully determined). Inman can go with Grant or Rao.

Logic games grouping must be true

Again, thinking this out. If two are evaluated by Tipton, three have to be evaluated by Smith, which leaves only one for Rao and Ullman (counting is always super important in grouping).

The one for Rao is Kent, the one for Ullman is Grant. We can’t have Hong, Madsen, and Inman together, so let’s put Hong and Madsen with Tipton, and then Inman, Farrell, and Lopez with Smith.

That was pretty easy! Just followed the chain of logic.

Logic games mixed could be the order

So, this is a mixed setup. Not too different, but a little different.

Let’s just go through the rules and see what’s up.

A works with the rules! Cool. Let’s just practice by looking at the other ones (you wouldn’t do this on the test).

Alright, good enough. Let’s do some more interesting questions with this.

Logic games mixed could be true

So, this is a could be true. This can get annoying to keep track of in my head, so I’m going to make a diagram here. N is not summarized, which means R and T are summarized. That’s going to look something like this (underlined is summarized). 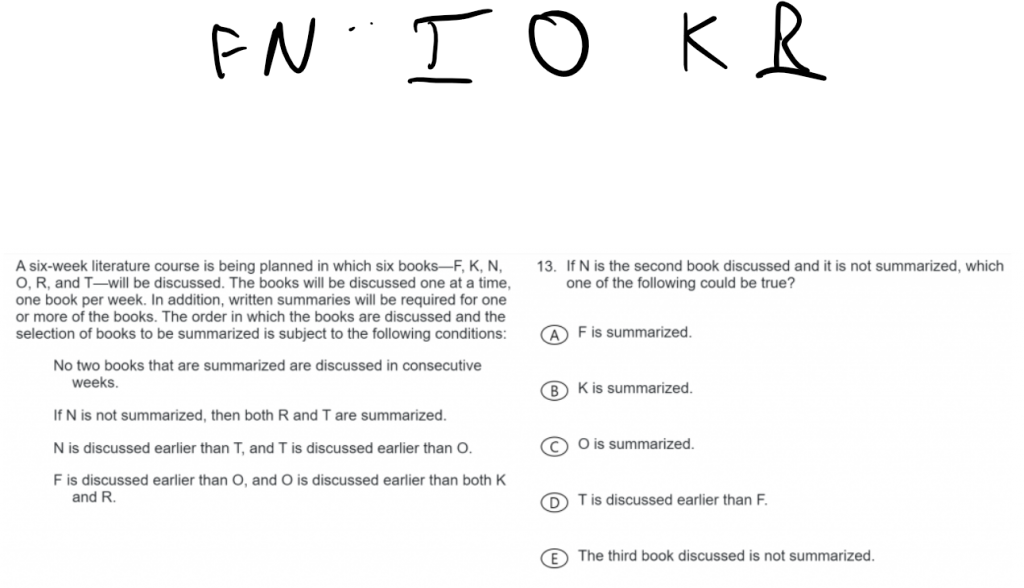 It’s actually pretty hard to make this all fit, with N still being the second. So I feel pretty good about answering this could be true.

A obviously works with the above diagram, and the other ones totally violate it. Done!

Ok, let’s follow our logic. If O is summarized, then, using our diagram from above (I’m lazy), T should probably not be summarized. That’s the big thing.

So E is tempting. If N’s not summarized, both R and T have to be summarized, and I’m pretty sure that boxes in O. However, let’s look at the other ones.

A is fine from our diagram above.

For B, let’s switch K and R in our diagram above, then summarize N and O. Then B works.

C is a little trickier. We’d have to summarize F and N (to avoid R and T), and we’re already summarizing O. How do we get them not touching each other? It’s not obvious. I’ll go back to this one.

D is easier (we can do same trick as B).

So let’s head back to E.  Can we make this one work?

Well, what if we do NTFOKR?

Oh, it works! Looks like my initial guess was wrong.

Once again, nobody’s favorite. Well, let’s see the effect of this rule.

A is too strict (T doesn’t have to be third, as we proved in the previous question).

B is wrong (T isn’t always earlier than F).

D’s not right. That would allow KR to be 1 and 2, which is obviously wrong.

This one I just wanted to do because it’s a tricky, weird question. There’s always one or two (sometime’s a whole game’s worth!) per section.

If the Turner is next to the Vuillard, then the Whistler has to be further away from the entrance than either of them.

The Turner and Vuillard can be second and third or third and fourth. Either way, there’s no room before them for the Renoir and Morisot (because they need one space between them).

The Turner and Vuillard can’t be second and third, because nothing could go first, then (none of the other paintings can be by themselves and right next to the entrance).

So they’re third and fourth, Pissaro and Sisley are 1 and 2,  Renoir is 5th, Whistler is 6th, Morisot is 7th. Nice!

A doesn’t work (no rules on who’s first).

C isn’t true (no rules on who’s first with Turner and Vuillard).

See? Logic games works no matter what. No need to worry!